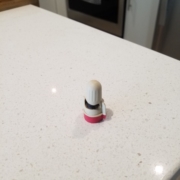 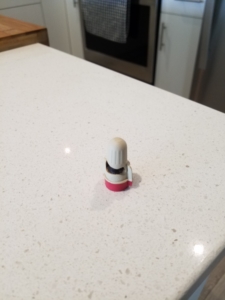 In Canada, this item is commonly referred to as a Marrette in the electrical field. This name is derived from its Canadian inventor and is actually a brand name, similar to how we may refer to tissues as “Kleenex”. It can go by many other names depending on whom you ask and where they come from, such as a wire nut or a twist-on connector.

If you are astute you may notice something extra special about this marrette: It’s melted in the middle! The truth is that this is a marrette that was discovered yesterday on a connection to my dishwasher and it is really rather serious! This melted marrette well illustrates the inherent danger of electricity in our homes. But why is it melted and what does that mean?

These twist-on connectors are used to safely connect two wires together, such as connecting the house wiring to the electrical system of a dishwasher. It turns out that the serviceperson who installed our brand new dishwasher a few weeks ago did not properly connect the wires together or twist the marrette on completely. Whatever the case may be, a poor connection was made in which 120 volts of electrical potential was trying to force it’s way through a heavily constricted path. This in turn led to overheating which melted our little friend here. The same thing will happen whenever we try to force too much electricity through too small or restricted a path, including a wire that is undersized or nicked. Let’s consider the implications of this.

While in most cases like this, the overheating will simply result in something melting and ceasing to function, as it did in the case of our dishwasher, there can be no doubt that in the past the very same thing has resulted in entire homes being burned to the ground. Alternatively, what if the marette had melted itself or other wires in such a way that a hot wire was now contacting some other conducting surface that we reguarly touch, such as the outer case of the dishwasher. It is for this very reason that modern homes have an equipment grounding pathway, (otherwise known as the funny third hole in our electrical outlets!) however it is possible that some older homes in Victoria do not have this provision. In that instance, I think you can imagine what would happen.

The point I am trying to impress on you is the inherent danger of bringing electricity into our homes. I implore you to never try to do any electrical work on your own home, no matter how many Youtube videos you have watched. You don’t know how many times I have inspected homes in which dangerous electrical work has been performed by the homeowner, and performed quite poorly. Trust me, you are not fooling anyone and nobody is going to want to buy your home if you choose to one day sell it. More importantly, it is simply not worth the potential risk to the safety of ourselves and our families, because as we have seen, even professionals can make mistakes.

Want to join the discussion?
Feel free to contribute!